Just in time for the 2012 London Paralympics this summer!!! 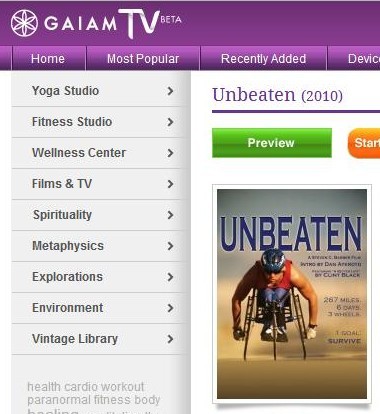 Asking For A Miracle (revisited - with poetry)

(« The Miraculous Draft of Fishes » - Artist Unknown - photography by TTaylor)

« Asking For A Miracle » is a short instrumental arranged for acoustic instruments, and written in a time of…

The Threshold Bookcast : Chapter 17 : Where Will You Be

Chapter 17 : Where Will You Be

The central character of this week's instalment of The Threshold Series is Rahu Lüli, the young cenobite from Kõrgus.

At the beginning of the chapter, the teenager is getting ready to leave the monastery, and he ponders the events that have led him to believe that he has found the…

A beautiful short video from one of the scholars in our upcoming "Caesar's Messiah" documentary:

The Threshold Bookcast : Chapter 16 : The Solid Time Of Change

Chapter 16 : The Solid Time Of Change

The sixteenth chapter of « 2206 : Window Onto A New World » features the scientific facilities of Veshtar, and revolves around Bernard Sturn.

At the end of an all-nighter, weary of responding to video emails, the famous space engineer takes a break to rest his eyes, and…

This week's instalment of the Threshold Bookcast takes place in Hasania, the so-called artificial state governed by Omar Malaki.

As the chapter begins, we find Richard Ramsay, the legendary Conservative leader, entertaining himself around the estate of his wealthy hosts, while he waits to…

The fourteenth episode of The Threshold Series focuses on Olivia Romero, the Chief Environmental Adviser of Neo Apollonia.

At the beginning of the chapter, the former activist is walking towards the church of the Community, all the while pondering the circumstances which have led her to…

Rahu Lüli, the teenage monk from Kõrgus, is once again the central character of the weekly instalment of the Threshold Bookcast.

This time, we find the novice reminiscing as he explores unknown territory uphill, following a hunch that has occurred to him prior to the morning…

The Threshold Bookcast : Chapter 12 : No Opportunity Necessary, No Experience Needed

The twelfth chapter of « 2206 : Window Onto A New World » features Aaren Mayr, the Treasurer of the Alliance of Sovereign Nations.

Flying back to Milagenia, the secessionist reflects on how his official functions have increased the frequency of his…

The Threshold Bookcast : Chapter 11 : The Preacher The Teacher

Chapter 11 : The Preacher The Teacher

This week's instalment of The Threshold Series revolves around Bernard Sturn and features Veshtar, the almost barren land also known as the radioactive planet.

As the chapter begins, the illustrious physicist is enjoying a cup of green tea in his office, reviewing the events…

The Threshold Bookcast : Chapter 10 : South Side Of The Sky

Chapter 10 : South Side Of The Sky

The tenth episode of the Threshold Bookcast focuses on Jake Harvey, the popular leader of the New Light Party.

At the start of the chapter, the rookie politician is enjoying a stargazing break on the observation deck of the space station his team and him are visiting.…

The Threshold Bookcast : Chapter 9 : Careful With That Axe, Eugene

Chapter 9 : Careful With That Axe, Eugene

Richard Ramsay, the Federal Chancellor of Ovel, is once again the central character of the weekly instalment of The Threshold Series.

At the beginning of the chapter, the veteran Conservative is temporarily escaping the pressures…

This week's episode of the Threshold Bookcast revolves around members of a religious community living in a high-perched monastery located in the highest mountain range on Ovel.

As the narrative begins, two of the cenobites, a novice and his experienced teacher, are climbing up…

The Threshold Bookcast : Chapter 7 : Giants Under The Sun

Chapter 7 : Giants Under The Sun

The seventh chapter of The Threshold Series focuses on the Parker-Evanses, a young Neo Apollonian couple, on a weekend visit to Triton Aeolus from their hometown of Neo Delphi.

While Frank Evans is being interviewed, his wife, Celia Parker, enjoys a moment of tranquillity with her…

In The Vortex (revisited - with poetry)

« In The Vortex » is an energetic instrumental put together while toying with ideas leftover from « Informaëlstrom » and « Leftoverturned. »…

The Threshold Bookcast : Chapter 6 : It Can Happen

Chapter 6 : It Can Happen

In this week's edition of the Threshold Bookcast, we follow Jake Harvey as he visits the illustrious Mistress Aeira for a private consultation.

At the beginning of the episode, the former businessman reminisces some of the events that have lead him to the political arena, and ponders what…

The Meaning of the Spring Equinox

In case this excellent video hasn't come to your attention, it is well worth watching and passing along:

The Meaning of the Spring Equinox
http://www.youtube.com/watch?v=V6Kl5tfsFT4

Hope you enjoy the balance of Light and Darkness in your lives!

As the title suggests, the fifth chapter of « 2206 : Window Onto A New World » reveals more details of the recently discovered spatial anomaly, the baffling phenomenon that has all of Ovel talking.

In this instalment, we meet the other two key figures of the Coalition of Progressives,…