The Miracle Is Worth The Wait

« Mother Of Pearl» was the last song written in the location where the music for the « The Abode Of The Blessed » EP was composed. Yet, arguably, considering the clear stylistic and thematic distinctions…

(« Spirit of the Night » by John Atkinson Grimshaw)

« Perfect Magic » is the 9th opus penned for the « 30 Songs for the Sunny Season » project. It was completed on February 6, 2013, and is the first new piece to follow the compositional rush that…

A Tide Of Positive Change

To Kill Your Demons

At some point during this past winter, I thought it would be interesting to see if I could come up with a bunch of songs that I could play on my own, without the need of a backing band. I had always wanted to try my luck at busking, but because of the demands of Poligraf, I… Some books help to change our lives. If you value your future then consider the wisdom that shines through the pages of this book. Here are a couple of passages that I hope will make you sit up and think.

The Abode Of The Blessed

My song on ABC Family's "Switched at Birth"

I'm so excited! A remix of my song "Parallel Universe" was featured on ABC Family's "Switched at Birth" last night! Let me know if any of you saw it - I totally spaced... ;->

Debra lost her 21-year-old son Wade, her unborn baby girl in the eighth month of pregnancy, both brothers to…

WHAT DOES IT TAKE? I have been a member of The C3 for a number of years now. However and by my own admission, I don't claim to have been the most active. Over that period I have contributed 22 blog posts and 13 videos. This was during the time when I was most active. To date I still have only 31 friends here.

so, to console myself over the loss of my blogged projects [which have miraculously reappeared], I have been devising a possible "blogbook" (checking out various blog platforms to see what looks right; also trying out their various options to create a variety of settings thus that the loss of one will not negate the project). The overall title/theme is "Year of Prophecies".…
Continue

I've been nearly completely inactive in my social networks since mid-July or so. Not that I wouldn't have liked to participate, but I have been engrossed in the redaction of the above essay.

When I tackled the project, I thought it would take a few weeks at most, and that I would be able… 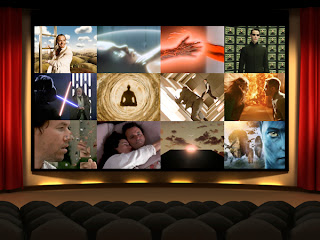 Announcing the Online Publication of Part One of
INTEGRAL CINEMA STUDIO: …
Continue

« Polygraph » is intended as a portrait of human relationships turning to the sour, hinting at the necessity of constant kindness and genuineness. The suite lasts about ten minutes and is composed of the following four sections : « Exposition, » «…

Re-creation at the End of the World

Re-creation at the End of the World
The end of the world as we have told ourselves it is:
Widening eyes align with changed underpinnings,
first causes, metaphors, stories of us.
Disruption, distorted transition, fear and…
Continue

Sooner Or Later (revisited - with poetry)

« Sooner Or Later » does not comes from Poligraf's catalogue as such. Rather, it is a piece for solo guitar that I intend to publish on an album of about…

Richard Ramsay is the star of the eighteenth episode of The Threshold Series, the concluding chapter of « 2206 : Window Onto A New World. »

We find the veteran politician staring outwards from a window of the sky lounge of his private yacht, musing about the weather, while on a visit…